A Mess O’ Trouble is a graphical adventure for the Macintosh that was originally released on July 8, 1994. It is the third game created and published by Ray Dunakin, an independent artist and illustrator. Ray distributed the game as shareware, initially through America Online and by mailing the game on floppy disks. The game was created with World Builder—an early authoring tool that let non-programmers create adventure games. Ray’s games were very likely the largest and most sophisticated ever created using the tool. Unfortunately, World Builder had been discontinued by the time Ray released A Mess O’ Trouble and games created with it suffered from some incompatibilities with then-current Macs. More recently, with Apple’s switch to Intel, World Builder games no longer run on Macs at all, except under emulators. To address that problem, Marc Khadpe, who has run the Internet download site for Ray’s games for nearly 20 years, created a new software engine that could run Ray’s games on Intel-based Macs. He also worked to add enhancements, such as a new menu system, to make it more accessible to modern players. Now, Ray is re-releasing the game on the Mac App Store using the new engine.

A Mess O’ Trouble is a classic-style adventure game on a grand scale. Players travel into “Ray’s Maze”, a mixed-up jumble of worlds and alternate spaces run by the mysterious being known as “Ray”. The objective is to find as many treasures as possible and discover the exit. But to do so requires players to solve puzzles, by carefully exploring the worlds, collecting information, and applying common sense and ingenuity. There are many worlds, each with their own inhabitants, challenges, and treasures. Finishing the game requires solving the major puzzles in each world, defeating the big baddies and helping people in trouble. 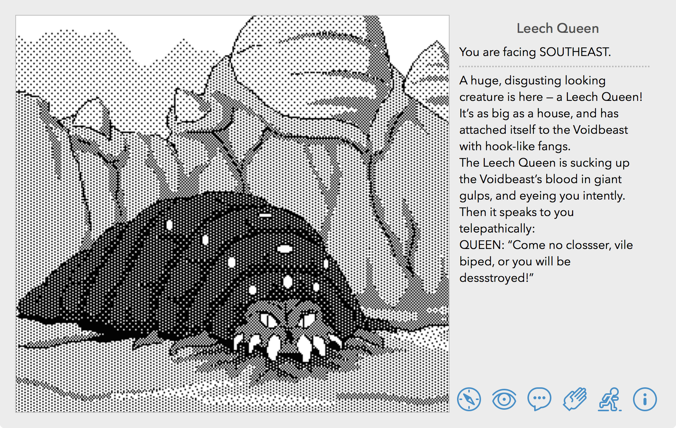 Players choose between one of two player characters—“Fearless” Frank or “Daredevil” Dawn. Each character has some unique puzzles, providing additional replay value to the game. The game is highly non-linear, with players able to travel to different worlds using Jump Doors and solve the puzzles in the order of their choosing. If a player is stuck in one area, they can can move on and take a fresh look at it later. Overall, the game is quite large for an adventure game, consisting of 300 individual scenes to explore.

The OS X release preserves the original gameplay, graphics, and art, while adding a new optional menu interface where the player can select commands. The original game was played with a combination of directly clicking on items, choosing commands from menus, and typing commands. The new menu system eliminates the need to type any commands, with all necessary commands being available from the menus. Where additional input is needed for a command, a dialog prompts players to click on the relevant choice or item. Players who prefer to type commands can still do so, of course.

Ray (and Marc) hope that the OS X release of A Mess O’ Trouble is fun for both long-time fans and new gamers looking for great adventure gameplay. Plans are in the works to release Ray’s other games as well. Please contact Ray for any press inquiries. A set of high-resolution screenshots and the game’s logo can be downloaded here. More information about Ray is available on his website.